Provided by Orlando Shakes in partnership with UCF 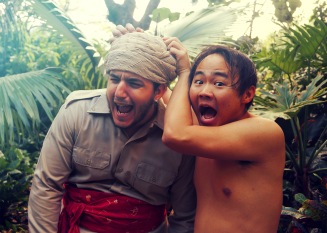 Orlando Shakes’ production of The Jungle Book is a retelling of Rudyard Kipling’s classic tale and will take audiences on a thrilling journey through the Indian jungle! Taken in by Mother Wolf as a baby, Mowgli, a now 11-year-old boy, has grown to know the Jungle Law and the ways of the wild. April-Dawn Gladu’s adaptation follows Mowgli and his pack of animal friends as they try to outsmart a cunning tiger who is seeking to settle an old score.

Honoring the culture in which the story takes place, “the costumes in this production are a celebration of traditional Indian dress and even include fabrics sourced from India,” says Costume Designer Mel Barger. “Our characters, like Bagheera and Shere Khan, are costumed in modified kurtas to match the silhouette of the animal they portray.”

Orlando Shakes is going above and beyond to ensure that children of all ages, abilities, and locations can experience the magic of theater. In addition to sensory-friendly and ASL-interpreted performances, Orlando Shakes will be live-streaming two performances of The Jungle Book to schools outside of Orange County. Immediately following the fifty-minute live performance, students will participate in a digital live chat with the cast, hearing the answers to their questions in real time. In order to further align the event to the school curriculum, Orlando Shakes is providing a study guide with discussion topics and extension activities that align to Florida Standards normally covered during November in 2nd-5th grade.

“By live streaming our performances, we are reaching a whole new audience and enriching the lives of students beyond the Central Florida community,” says Anne Hering, director of education at Orlando Shakes. “Even if a school doesn’t have access to field trip funding or a live theater in their community, their students can still have a performing arts experience. ”

Schools can apply to live-stream the event at http://orlandoshakes.org/streaming. Schools must apply by November 1, 2018. This event is recommended for students in 2nd-5th grade.

Celebrating its 30th Season, Orlando Shakes in partnership with UCF, produces classic, contemporary, and children’s plays. Under the leadership of Artistic Director Jim Helsinger and Managing Director PJ Albert, Orlando Shakes is one of the region’s most acclaimed professional theaters, garnering national recognition from The Wall Street Journal, “Spectacular and satisfying…Broadway-quality…impressive…come to Florida and plunge yourself in…”

With ambitious, high-caliber productions like 2018’s Twelfth Night and Shakespeare in Love, and 2017’s The Great Gatsby and Man of La Mancha, the Theater continues to provide an innovative world-class theatrical experience to its guests, while showcasing William Shakespeare’s legacy as the cornerstone of the company. Orlando Shakes also offers immersive educational programming that serves Central Florida schools and the local community at large.

ABOUT THE JUNGLE BOOK

The Jungle Book adapted by April-Dawn Gladu, produced by Orlando Shakes in partnership with UCF, appears in the Margeson Theater from October 18 – November 16, 2018.

The Jungle Book is sponsored by Dr. Mary Palmer, Publix Supermarket Charities, and Florida Hospital for Children. The live stream program is made possible by the Elizabeth Morse Genius Foundation.

Orlando Shakes is supported by United Arts of Central Florida, host of OrlandoAtPlay.com and UAArtsEd.com. This project is sponsored in part by the Department of State, Division of Cultural Affairs, the Florida Council on Arts and Culture, and the State of Florida.

Interested in seeing your organization featured on Culture Builds Florida? Please fill out this form: https://goo.gl/forms/3sMwuJWA3bM1orPl2.