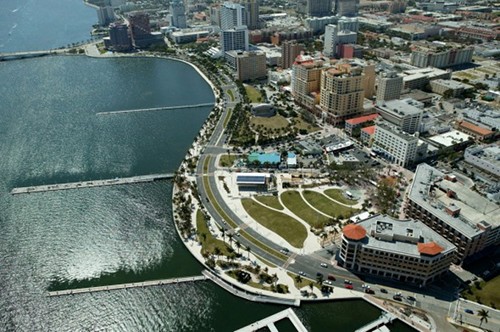 EcoArt on the West Palm Beach waterfront. Michael Singer served as the primary designer of this project, completed in 2010. This work is a significant example of the cross disciplinary work of a sculptor who has been doing large scale infrastructure related environmentally sensitive art for decades. (photo submitted by EcoArt South Florida)

Today’s Art Talk is a conversation with EcoArt South Florida. EcoArt is a multi- and cross-disciplinary practice that weds art with the best environmental science and community engagement.

DCA: Tell us about EcoArt South Florida.
EcoArt South Florida: EcoArt South Florida encourages broad support for environmental stewardship within communities by involving citizens of all ages and demonstrating innovative and aesthetically striking ways to create and save energy, reduce heat island effect, capture and reuse stormwater and many other positive approaches to enhancing the health of our interrelated ecosystems. EcoArt (short for ecological art) is not a new art practice. It is only new here in Florida! 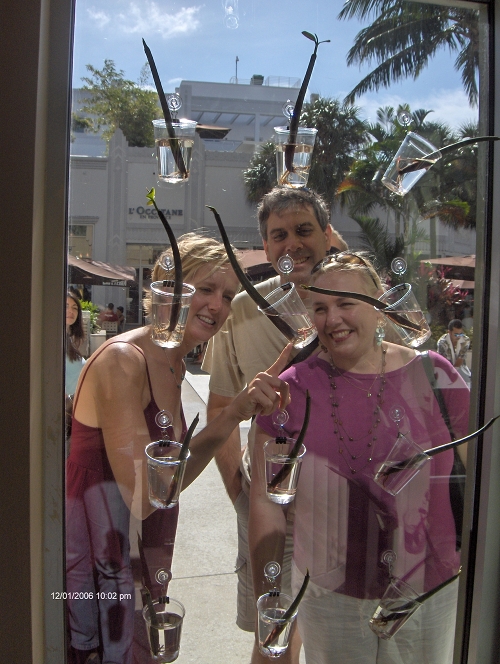 DCA: How does EcoArt encourage the public, and in particular, elected officials, to incorporate arts and culture into everyday life?
EcoArt South Florida: EcoArt South Florida intends to assist targeted communities to establish “EcoArt Nodes” in each of South Florida’s five watersheds by 2015. We define an EcoArt Node as a committed group of stakeholders, with a strong organization at its center (either as its own nonprofit, or as a subunit of an existing organization) dedicated to growing EcoArt and supporting emerging EcoArtists in their locale. An important stakeholder group that must always be included as each EcoArt Node is established, are elected and career officials of municipal and county governments.

The locations for our EcoArt Nodes have been scientifically identified by our GIS study of all five watersheds in South Florida, completed for us by Dartmouth College’s department of geography undergraduate students, Spring, 2011.

EcoArt South Florida’s comprehensive community education program and artist apprenticeship is specifically designed to engage key communities in best ways to establish and support strong EcoArt practices in their areas. We will work with the communities identified as EcoArt Nodes to field this program which will be the basis for ongoing development and support of EcoArt practice.

In addition to establishment of targeted EcoArt Nodes, starting in early 2012, EcoArt South Florida Board and Advisory Committee members will begin to meet where they live, with county and city officials.

To date, the only municipality in Florida we are aware of that has done this is Boynton Beach. Credit goes to Boynton’s Mayor and Commissioners for establishing a Green Alliance of local citizens involved in Green urban and community development that recommended key elements of a Green Ordinance for the city. EcoArt South Florida was a member of this alliance. The resulting new ordinance Includes mention of EcoArt at various places. We are delighted to encourage our city and county officials to follow the lead of Boynton Beach in assuring that EcoArt is included as their communities develop creative ways to “go green.”

Follow the link to learn more about how EcoArt has been integrated into Boynton’s many new green initiatives, please contact the administrator of Art in Public Places Debby Coles-Dobay.

DCA: What does EcoArt do for South Florida?

EcoArt South Florida: EcoArt practice has many identities. All contribute to the community. Most involve the community at every level of the planning, design and creation of EcoArt projects.

In addition to our consultations with communities we have identified as EcoArt Nodes, and continuing to develop our pilot community education and artist apprenticeship program, EcoArt South Florida is also currently working on three program aspects that we believe have great potential for inspiration, education and engagement of the public:

EcoArt South Florida believes EcoArt will not prosper in our region unless public officials, both elected and career, and our colleagues in the building, development and planning professions are given incentives to do so. It is for this reason that we will be focusing heavily over the next year to two years on insertion of EcoArt within city and county green ordinances as has been done in Boynton Beach.

DCA: What does the future of EcoArt hold for Florida?
EcoArt South Florida: We believe Florida can become one of the key centers for EcoArt practice. EcoArt South Florida is dedicated to making this happen. And this is as it should be. As we point out on our website, engagement of art and culture with environmental issues is still not widely done anywhere, not only in Florida. This is a shame, because, as those of us involved in the arts professions know well, art has the potential to inspire, educate and engage in so many ways. This inspiration and engagement will be necessary if we are to address successfully the many serious implications of climate change. And we have very little time to do this. Art is a form of knowledge, just as important as science. Unfortunately art and artists have not been adequately engaged with science in the struggle to bring our valuable ecologies back to health. Now is the time to bring EcoArt to the task.

DCA: Why do you believe arts and culture are important in the lives of Floridians and visitors to our state?
EcoArt South Florida: Art creates culture and has for as long as human being have inhabited the earth. The best time to have begun to bring art to the task of healing our fragile ecologies was many decades ago. The second best time is now. Florida needs us. The planet needs us. Let’s get to work applying artistic imagination and creativity in tandem with scientific advances to the challenges that face us.